First, you need to go into an empty dir.

You can run the granoo-cooker program with this input file.

Wait until the simulation is ending. Now, your directory must look like this.

A new directory named TEST is created. In this directory, the files CompactDomain.* are discrete domain files. Note that granoo uses several kind of files. Each file format have its own advantages and disadvantages. You will learn it in detail later. Now, you can take a look to these files thanks to the granoo-viewer program. 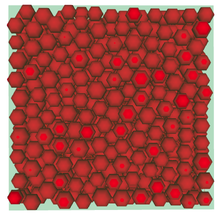 Changing the shape of the discrete domain

To change the discrete domain, you must edit the input file. First, make a copy of the original one and name it my-cookbook.inp.

Here, you can change the length DimX, DimY and DimZ of the bounding box. You can also change the Type of the shape. You can change it by Sphere, Cylinder, Cone or Polyhedron keywords. For example, the following line gives a sphere of 0.5 radius.

With this new settings, you must obtain something like this : 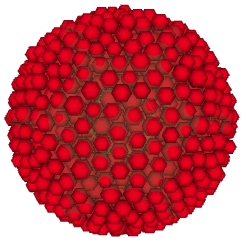 If you want a cylinder :

Now, if you want a polyhedron, you need an off file. You can get one from the granoo repository.

And set the right option for polyhedron : 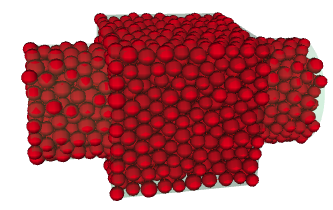 Changing the number of discrete element

In order to change the number of discrete element contained, you should find the line

and simply change the value of the TotalDeNumber Xml attribute.

The next part may be useful if you want to get finest control of the cooker algorithm.

The stop filling criterion is set through the StopFill plugin

The default value corresponds to a cardinal (or coordination) number of 6.2 that corresponds to a random close packing. Note that you can replace this default value. In addition, you can change the Criterion. Allowed criterion are : Cardinality, Compacity or ElementNumber. You can use these three criteria to stop filling. The following line stop filling when the total discrete element number reach 5,000.

The following line stop filling if the compacity reach 0.63

Speed up the cooking algorithm

At the end of the cooker algorithm, discrete domains are highly interpenetrated. So a last step, named Relax, consists in decreasing the interpenetration to a small acceptable value. Note that this step is very time consuming ! Depending on further usage, this step is not mandatory. You can disable it by replacing the Process xml tag by the No value

Another way to speed-up the computation is to increase the PacketSize number. This value corresponds to the number of discrete element added to the domain in one iteration step. Note that many iteration steps are processed to stabilize domain after adding a packet of n elements.

By default, a uniform distribution law is used to randomly choose discrete element radii. The range of this distribution is 25% of the average radius. You can change it by editing the RandomRange xml tag.

The last step of the cooker algorithm is dedicated to the element pair construction. An element pair is simply a connection between two discrete elements. It allows to build a discrete element network that may be used later for continuous modeling with GranOO thanks to the beam cohesive model. You can control the value of the average coordination number of this network with the WantedCardinalityValue xml tag. This plugin simply involve a dichotomy process that virtualy increases/decreases the discrete element radii while the WantedCardinalityValue is not reached.

Another strategy to build the network is to involve a Delaunay triangulation tessellation between the center of the discrete elements. So you can replace the _BuildNeighbourElementPair by _BuildDelaunayElementPair plugin as it follows

The following image shows the difference between the two strategies. Note that the BuildDelaunayElementPair gives higher coordination number close to 13.6 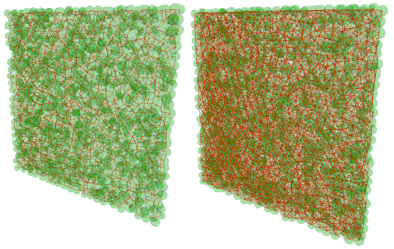 Many strategy can be used with the cooker algorithm. If you want a complete description of the algorithm you can take a look into this book. 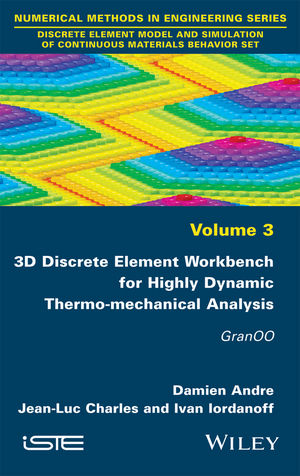